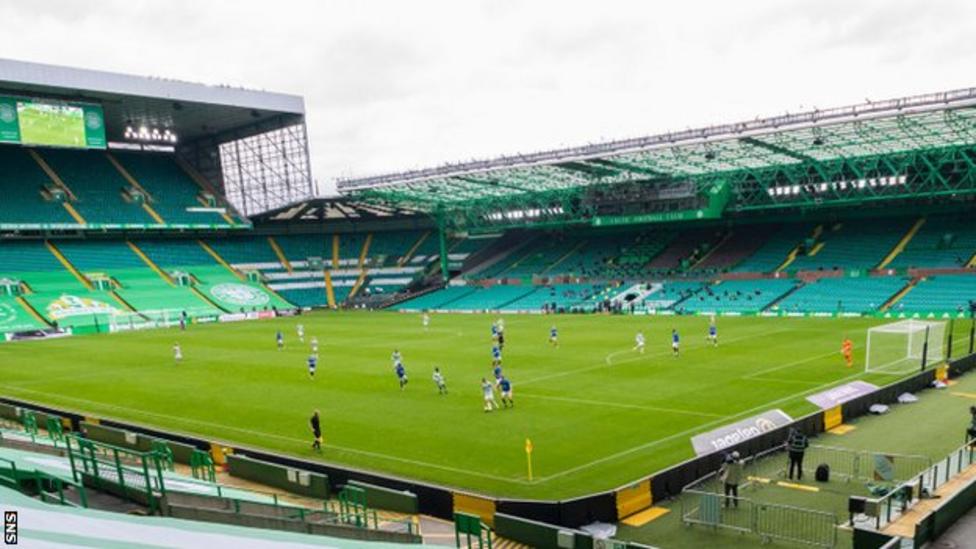 Celtic have requested the Scottish Premiership winter break be moved forward to avoid festive fixtures being impacted by capped capacities.

First minister Nicola Sturgeon has announced outdoor sporting events can have a maximum of 500 people attending from 26 December for three weeks amid a rise in Covid-19 Omicron cases.

Celtic go to St Johnstone and host Hibernian and Rangers in that period.

Hearts have also told fans they are “exploring all options”.

St Mirren ask for Old Firm postponements because of Covid cases
The winter break for the Scottish top flight is due to commence on 4 January, with Hibs the first team back in Scottish Cup action on 20 January.

“Everyone at Celtic recognises the difficulties presented to society by the current pandemic and the health and safety of all must always be our priority,” said Celtic, whose fixture on Wednesday with St Mirren is now in doubt with the Covid-hit Paisley club requesting a postponement.

“In light of today’s announcement regarding supporters attending matches, Celtic can confirm that it has today requested that the SPFL bring forward the scheduled winter break and reschedule the fixtures affected by the regulations announced.

“The game owes it to supporters to explore all opportunities to maximise the prospect of all supporters being able to attend matches and support the game they love.”

As well as limits on numbers, the first minister also confirmed one metre social distancing will be put in place.

A statement from the Scottish FA/Scottish Professional Football League Joint Response Group (JRG) did not make reference to any potential postponement of fixtures, instead saying they sympathise with clubs and supporters.

The statement also said the group are in discussion with the Scottish government to ensure any loss of income for clubs due to the new measures are compensated.

“Today’s news will be a hammer blow to clubs and fans across the country, who simply could not have done more to mitigate the impact of the ongoing pandemic,” SPFL chief executive Neil Doncaster said.

“Our clubs have adapted quickly and effectively to previous restrictions, and we will work with them in implementing the guidance from today’s announcement in the coming days.”