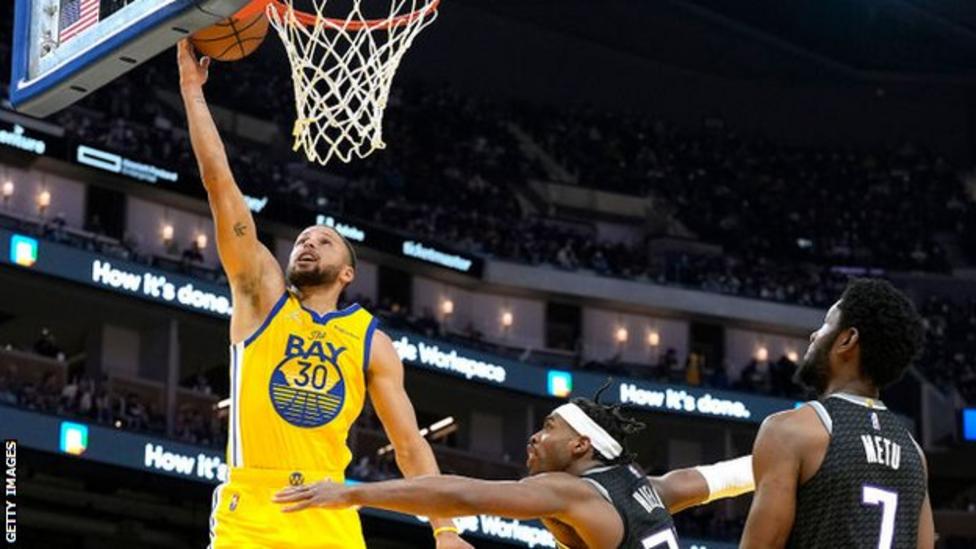 Stephen Curry returned to lead the Golden State Warriors to a 113-98 win at home to the Sacramento Kings.

The Warriors had four players out and trailed late in the third quarter.

But Curry, who missed Saturday’s loss at Toronto, scored 15 of his game-high 30 points as the Warriors outscored the Kings 29-19 in the fourth quarter to stay second in the Western Conference.

It was Curry’s 11th 30-point game of the season while Draymond Green claimed a triple-double, including 16 points.

Tyrese Haliburton had a team-high 24 points for the Kings, who had six players out for Monday’s game and are now just outside the play-off spots.

The four-time All Star finished with 41 points and 10 rebounds while Seth Curry – brother of Stephen – added 26 points and Tobias Harris 25.

Philadelphia ended a three-game losing streak at they played for the first time since last Thursday, with Sunday’s game having been postponed because of the team’s Covid-19 outbreak.

The Chicago Bulls are short-handed because of Covid yet claimed their second win in as many nights to cruise past the Houston Rockets 133-118.

DeMar DeRozan scored a game-high 26 points and Coby White followed with 24 to lead six players in double figures for the Bulls, who remain second in the Eastern Conference.

Shai Gilgeous-Alexander scored 23 points as the Oklahoma City Thunder held on for a 102-99 win at the Memphis Grizzlies to avenge their record 152-79 loss to Memphis earlier this month.