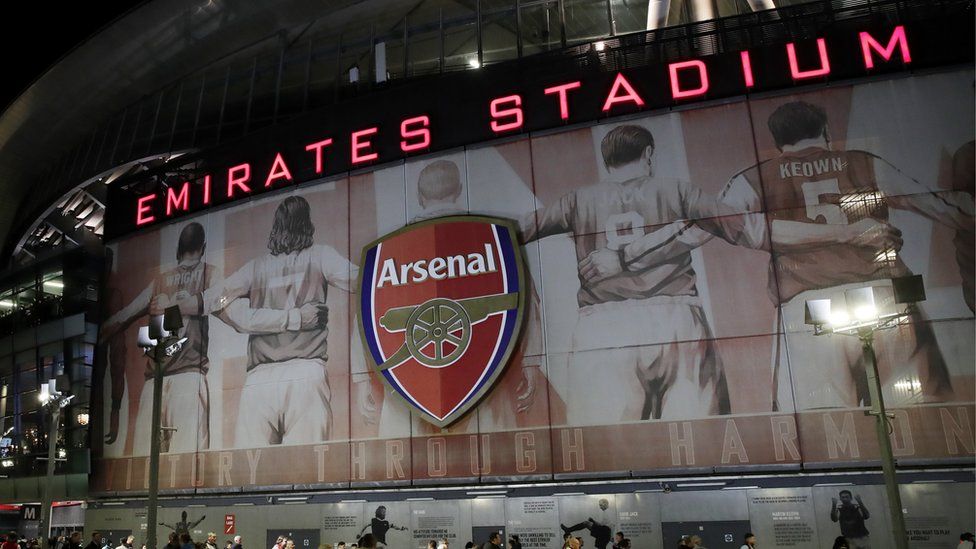 The Advertising Standards Authority (ASA) argued the club had “failed to illustrate the risk of the investment”.

It ruled “the ads must not appear again in the form complained about”.

Arsenal said it would seek an independent review of the ruling, adding that the club had provided information on the financial risks.

But critics, including some supporters’ groups, suggest that clubs who promote crypto fan tokens are encouraging people to engage in the risky, and largely unregulated, world of cryptocurrency investment.

The first breach, according to the watchdog, focused on content on Arsenal’s official website – in particular a page posted on 6 August 2021 with the title ‘$AFC Fan Token: Everything you need to know’.

The second breach was a Facebook post on the club’s official page, posted on 12 August 2021, which read: ‘$AFC is now live’ and asked fans: “What song do you want to hear when we win? Download the Socios app to get your token and vote”.

irresponsible – because they took advantage of consumers’ inexperience or credulity and trivialised investment in crypto-assets.
misleading – because they failed to illustrate the risk of the investment.
In addition, it said the Facebook post “did not make clear the ‘token’ was a crypto-asset, which could only be obtained by opening an account and exchanging with another cryptocurrency which had to be purchased”.

The watchdog found that both the website and the Facebook post broke its rules: “The ads must not appear again in the form complained about,” it stated.

‘Carefully considered’ communications
Arsenal football club told the BBC: “We take our responsibilities with regard to marketing to our fans very seriously.

“We carefully considered the communications to fans regarding our promotions and provided information regarding financial risks.”

The Club said it would be seeking “an independent review of the ASA’s ruling to seek greater clarity on the ASA’s current position”.

In defending its marketing to the ASA, Arsenal argued the website did include the warning that fans “could lose some or all of their money invested”.

It said the marketing material stated: “We advise you to spend only what you can afford and seek independent financial advice if required.”

The Club argued the fan tokens were not promoted as an investment and they did not encourage the trading of tokens.

Crypto boom
Arsenal is the first club whose fan token marketing is judged to have breached advertising standards by the watchdog.

It is one of a number of clubs to have joined forces with a company called Socios, which offers fan tokens through its app.

Socios told the BBC’s Tech Tent podcast it has sold $270m-300m worth of coins through its app, but declined to reveal how much money goes directly to clubs it works with.

Responding to the recent ASA ruling, Socios said: “We welcome Arsenal’s call for an independent review. This is a fast-moving area and clarity is needed to ensure all companies can adhere to the latest guidelines.”

Clubs say that by collecting fan tokens, supporters can influence the running of the club – suggesting the more tokens fans collect, the more say they might have.

But with the exception of free non-tradeable fan tokens given to club members, fans have to use a crypto-currency called Chiliz ($CHZ) to buy and sell tokens.

So far, across the five major European leagues, 24 clubs have launched or are considering launching fan tokens, including eight Premier League sides.

‘High-risk’
However, some supporters groups are wary. In August, the Arsenal Supporters Trust said the club should make it clear that crypto-currency is an “unregulated activity” and was risky.

Tim Payton, a board member of the Trust told the BBC that “clubs should not be allowed to use football’s popularity to push an inherently high-risk product”.

The Trust believes government and the football authorities should look into partnerships between clubs and crypto-currency companies.

Mr Payton said if they are to continue, then a greater effort must be made to ensure that all marketing materials “inform all fans of the downside involved in buying tokens”.

The Advertising Standards Authority (ASA) says monitoring crypto-assets, like Bitcoin, is a “red-alert priority” and it is concerned that many ads fail to fully convey the risks of investing.

Guy Parker, the authority’s, chief executive told the BBC crypto-assets were “poorly understood by the public” and were mostly unregulated, and not backed by financial compensations schemes.

His message to consumers was “think very carefully before you buy. Do you understand crypto-assets well enough? Can you afford to lose what you’ve spent?”

The watchdog says it plans to issue guidance on crypto-asset marketing in the new year, and will continue to publishing rulings on ads for NFTs, crypto-currencies and fan tokens in the interim.