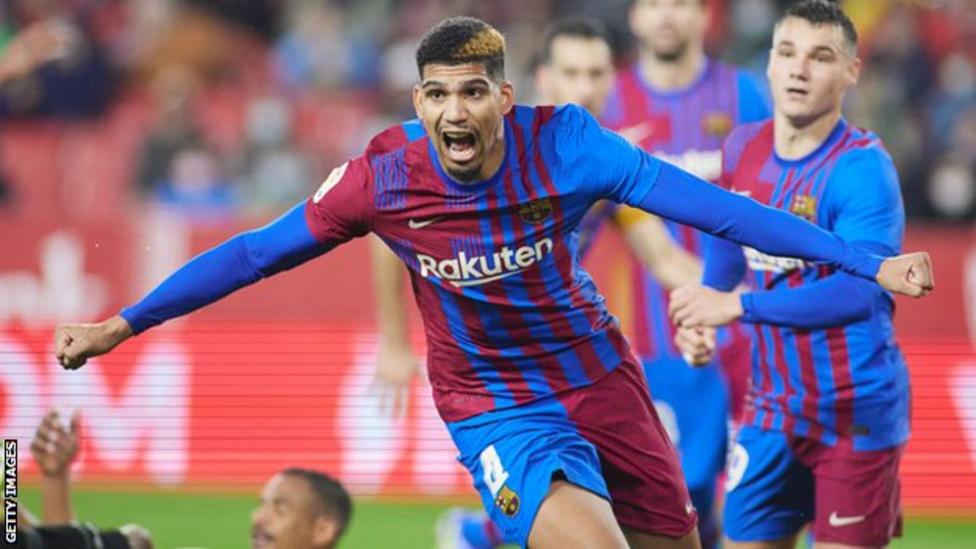 Barcelona ended a torrid 2021 in disappointing fashion with a La Liga draw at 10-man Sevilla.

Xavi’s men failed to find a win that would have taken them up to fourth.

Sevilla led following a training-ground move from a corner, as Ivan Rakitic rolled the ball into the area for Alejandro Gomez’s first-time finish.

Ronald Araujo’s header levelled before half-time and although Jules Kounde was sent off for throwing the ball at Jordi Alba, Barca could not break through.

Relive Barcelona’s draw at 10-man Sevilla
The visitors did have chances with their man advantage but Gavi could not find the target with his free header and Ousmane Dembele curled against the post with six minutes remaining.

On-loan striker Luuk de Jong came on as a substitute and could have netted against his parent club deep in injury-time, but a weak header was straight at Sevilla goalkeeper Bono.

Xavi’s side do move up one spot to seventh, while second-placed Sevilla failed to make up ground on league leaders Real Madrid and are now five points adrift of Carlo Ancelotti’s men.

Barca travel to Mallorca in their next game on 2 January, hoping 2022 brings better fortunes after losing superstar Lionel Messi on a free transfer, sacking manager Ronald Koeman and being knocked out of the Champions League group stage this year.