Carabao Cup: Arsenal on the semi-finals. 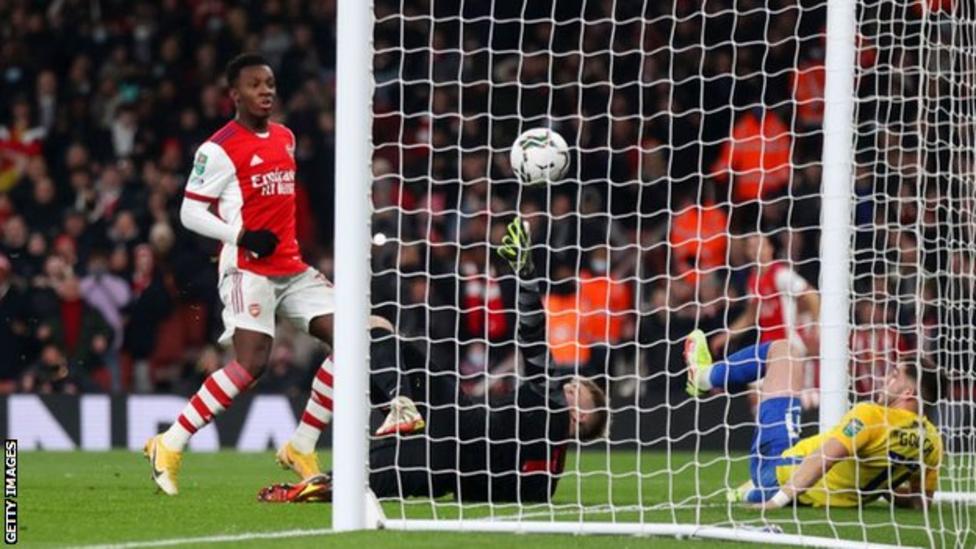 Eddie Nketiah continued his prolific form in the Carabao Cup with a hat-trick as Arsenal saw off League One Sunderland to book their spot in the semi-finals.

The forward turned in from close range to open the scoring after Rob Holding’s header was palmed into his path and Nicolas Pepe soon doubled the hosts’ lead.

That looked to have put the Gunners in control only for Sunderland to hit back when Nathan Broadhead coolly clipped over the onrushing Bernd Leno from Elliot Embleton’s superbly-weighted pass.

But Nketiah cleverly turned in a low Nuno Tavares cross straight after the break to re-establish the lead. The 22-year-old saved his best until last, though, flicking Pepe’s pass between his legs and beyond goalkeeper Lee Burge.

Arsenal’s 18-year-old debutant Charlie Patino then capped a superb night for the Gunners with an injury-time fifth at Emirates Stadium.

Sunderland were competitive but, despite Embleton curling against a post from distance, the visitors struggled to contain their top-flight hosts and it was a comfortable victory for Mikel Arteta’s men.

Arsenal will discover their last-four opponents on Wednesday when the draw takes place after Tottenham host West Ham.

‘To have his debut & score is something special’ – Patino excites Arsenal fans & Arteta
Reaction to Arsenal v Sunderland
Nketiah shines as Patino shows potential
Arteta celebrated his two-year anniversary as Arsenal boss on Monday and, while he has already delivered silverware in the form of the 2019-20 FA Cup, it feels for the first time like the Spaniard is beginning to see his desired philosophy take hold.

Without the distraction of European football, the Gunners are fourth in the top flight and can now look forward to a cup semi-final too.

Despite having Albert Sambi Lokonga, Pablo Mari and Calum Chambers missing after positive Covid tests, and Ainsley Maitland-Niles absent with illness, Arteta was still able to make nine changes from the side that beat Leeds 4-1.

League Cup specialist Nketiah was one of those to come in and produced a goalscoring performance that will have him knocking on the door for more first-team involvement.

The forward has now scored five in three games on Arsenal’s run to the last four, but has only seen 38 minutes of Premier League action this season and reportedly turned down a new contract, with his current deal ending in the summer.

Nketiah netted all three of his goals from around the six-yard box as the poacher bundled in the opener with his knee, got across his marker to steer Tavares’ whipped ball in for his second and then added a delightful third.

Pepe got Arsenal’s second in the 27th minute, finishing smartly after combining down the right with Cedric Soares, and it seemed Arsenal were cruising, only for Sunderland to respond four minutes later.

Embleton had almost scored a bizarre own goal earlier, diverting a pass onto his own crossbar, but measured an excellent pass into Broadhead’s path for the Everton loanee to finish a swift break.

That was the first time Arsenal had conceded in the competition this season and they seized control after the restart as Nketiah completed his treble in the 58th minute.

That allowed Arteta to bring on highly-rated teenager Patino, born during the Gunners’ Invincibles season of 2003-04, and the midfielder slotted into the corner from Pepe’s ball just 11 minutes into his first senior appearance.