What does 2022 hold for Emma Raducanu 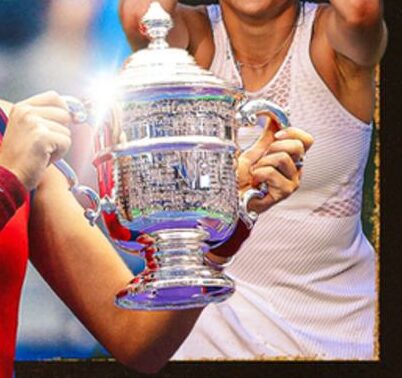 As the awards for 2021 keep rolling in, Emma Raducanu, Sports Personality of the Year winner, has her eyes set firmly on 2022.

The 19-year-old accepted her BBC Sports Personality of the Year trophy from her hotel room in Abu Dhabi, where she is isolating after testing positive for Covid-19.
All being well, she will be able to celebrate Christmas properly in the Middle East, before flying to Australia for the start of the WTA season, and the year’s first Grand Slam in Melbourne.

Raducanu’s rise has been spectacular, and unprecedented – in that no-one, neither male nor female, had ever before won a Grand Slam singles title in just their second appearance.

So, should she lose in the first round of the Australian Open, it’s no big deal, OK?

The US Open champion will start the year at 19 in the world rankings – and in the short term, the only way is up.

Raducanu has virtually no ranking points to defend until Wimbledon, so she could well be a top 10 player before the trees are fully in bloom.

But for a much better indication of where she sits in the women’s game, wait until the end of next season.

Where will Raducanu be once she has completed her first full year on tour and lost the colossal number of ranking points she accumulated in New York?

Top 50, I think, would represent a decent year.

It relies on steering clear of injury, battling tiredness and jet lag as the tour moves across time zones, and producing the exceptional level required, week in week out, on a variety of surfaces, against more experienced and battle hardened opponents.

Raducanu will be a teenager for all of next season, and there are only six teenagers in the top 100 as this year draws to a close.

I am sure Raducanu will privately be aiming higher, but it is just so hard to guess what happens next. Her long term prospects are very exciting, but what will be the outcome when a 19-year-old US Open champion – with much less tour experience than all of those other top 100 teenagers – sets out on her rookie year?

Raducanu will have greater stamina and physical resilience after a couple of years on tour. There will be blocks of physical training, many nauseously unpleasant, and long hard court matches on consecutive days under a blazing sun, before a flight to the next city on the schedule to do it all over again.

The British number one will also hope to forge a strong relationship with her new coach Torben Beltz.

He is, as Raducanu says, “a really positive, cheerful guy who brings great energy to the team”. That could be a great partnership.

As the US Open champion, Raducanu will encounter a string of highly-motivated opponents. Witness the exhilarating performance of Marta Kostyuk – who is just four months older, and was tipped for stardom after reaching the third round of the Australian Open at the age of 15 – in the quarter-finals of the Transylvania Open, and then the Chinese qualifier Wang Xinyu in Linz in November.

That will not make life any easier in the short term, but as Serena Williams has discovered, this can turn you into an even better player.

Commercial interests will be pursued, and public appearances made. Everything is fine in moderation. How many 18-year-olds would you expect to turn down an invitation to the Met Gala in New York?

A dozen or so sponsor days a year will increase an athlete’s workload, but can comfortably be woven into a schedule. Raducanu knows this is just the beginning. She is hungry for more, and seems unlikely to be distracted. And if she is, then her parents are sure to be the first to remind her to keep her eye on the ball.

It is delightful to think someone totally unknown to the vast majority of the British public just 12 months ago is now held in such great affection.

Teenage success is very compelling, and sporting success can be very unifying. You did not need to be a tennis fan to be charmed by Raducanu’s stirring achievement, and many have already taken her to their hearts.

They may feel quite protective towards her in future, and forgive the odd indiscretion.

And those younger than Raducanu can hardly not be inspired by what she has achieved.

Andy Murray could not be a better champion of women in sport, but for all those teenage girls who may find themselves feeling less comfortable about competing, what greater inspiration could they have than Emma Raducanu?