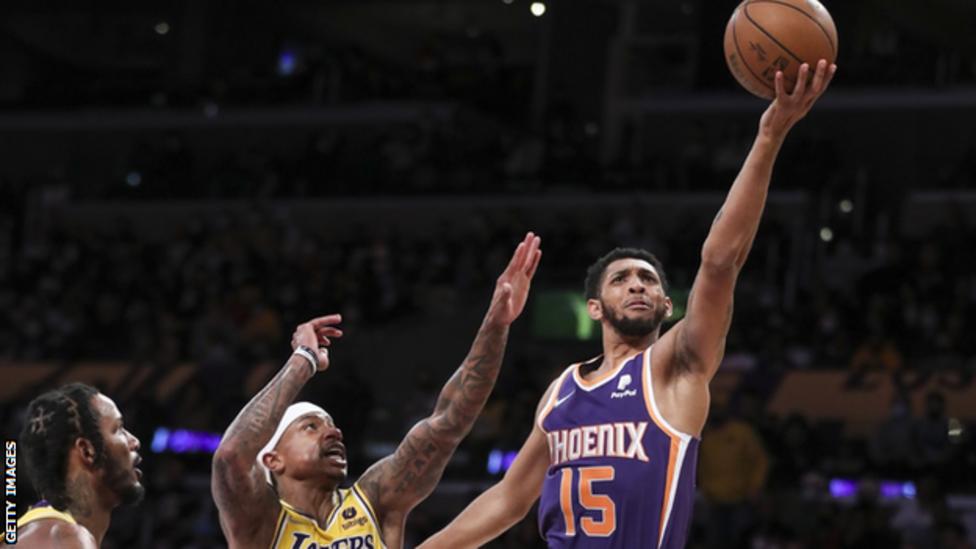 The Los Angeles Lakers were beaten 108-90 by the visiting Phoenix Suns as their losing streak stretched to three games.

The Suns recorded their 24th victory in 26 games as Devin Booker scored 24 points in his second game back from a hamstring injury.

LeBron James added 34 points for the Lakers but injured his ankle with six minutes remaining.

The Lakers were without head coach Frank Vogel, plus players Kent Bazemore, Malik Monk, Avery Bradley and Austin Reaves, who all remain unavailable under the NBA’s Covid-19 health and safety protocols.

Before Tuesday’s victory, the Suns had been 1-2 on the road since their 18-match unbeaten run was ended by the the Golden State Warriors on 3 December.

Elsewhere, Tyler Herro returned from a three-game injury absence to lead Miami Heat to a 125-96 win over the Indiana Pacers. Herro tied with Duncan Robinson for a season-high 26 points for the Heat.

Dallas Mavericks denied the Minnesota Timberwolves a fifth-straight victory as they ran out 114-102 winners, while the Detroit Pistons were beaten 105-91 by the New York Knicks and the New Orleans Pelicans defeated Portland Trailblazers 111-97.

Meanwhile, NBA commissioner Adam Silver has said there are no plans to postpone the league despite a rise in coronavirus cases.

Seven games have been postponed since last week, with the league’s website saying 84 players from 20 teams had entered health and safety protocols as of Tuesday.

“We have of course looked at all the options but, frankly, we are having trouble coming up with what the logic would be behind pausing right now,” Silver said.

“As we look through these cases literally ripping through the country, I think we’re finding ourselves where we knew we were going to get to over the past several months, and that is this virus will not be eradicated, and we’re going to have to learn to live with it.”

Media outlets in the United States have reported the 10 NBA teams playing on Christmas Day have been told the times of their games could change at late notice, potentially the day before the fixtures.