Managers to meet with Premier League 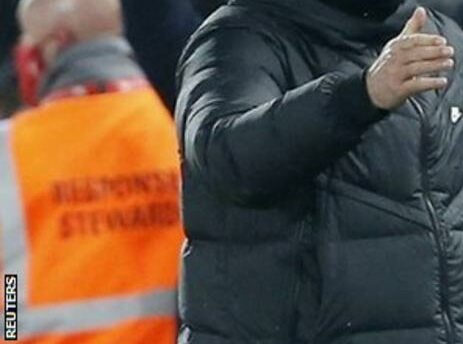 Liverpool boss Jurgen Klopp has said managers will meet with the Premier League on Thursday to discuss issues around the Covid-19 pandemic.

Nine of the past 20 top-flight games have been postponed, but Premier League clubs decided on Monday to not make any changes to the festive schedule.
Liverpool beat Leicester on penalties in the Carabao Cup on Wednesday.

And Klopp said he would prefer the semi-final with Arsenal to be one game instead of two legs.

“I think it would be better with one game absolutely, but obviously what I say is not too important,” he said after making 10 changes for the quarter-final, with three academy players in his starting line-up and five on the bench.

“If there are two games, then we will play two games. But it would be helpful if there was only one, true.
“If the draw has us at Arsenal, I’m fine with that – we play there and see who is better and go for it.”

The Reds came back from 3-1 down against Leicester to draw 3-3 at Anfield, and then win 5-4 on penalties.

As it stands, they will face Arsenal in the weeks beginning 3 and 10 January in a two-legged semi-final.

“I don’t just speak about player welfare this year, I have been speaking about it for six years or maybe longer,” said Klopp.

“If the things I say would help more, I would say it much more often. But it doesn’t help.

“The only thing I do with these messages is I create headlines. They never arrive at the right places.

“Tomorrow we have a meeting at 4pm but it’s with the Premier League and not with the EFL, I’m not sure if they are involved or not.

“I said it before, I would prefer only one semi-final. But I can’t see any kind of changes actually.”

Tottenham boss Antonio Conte, whose side beat West Ham 2-1 to set up a last-four tie with Chelsea, has similar views.

“Maybe it would be better to play one game and not two games, especially for the situation we are living but we have to respect the rules,” he said.

Klopp also said he was not happy at having to play Premier League matches on 26 and 28 December, and did not know why the second game could not be played on 29 December instead.

Meanwhile, Leicester boss Brendan Rodgers said he would like teams to be allowed to make five substitutions in the Premier League again.

Football laws were changed during the first coronavirus lockdown in 2020 to allow teams to make five changes in each game instead of three.

The Premier League was one of the only major leagues to go back to three at the end of the 2019-20 season.

“If that was something we could do, we would definitely help the players,” said Rodgers.

“We don’t have that deep squad. If we could go to five subs, we would certainly advocate that.”

Leicester were playing their first game in 10 days with their past two matches called off because of Covid.