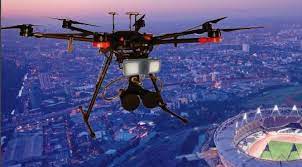 World Cup to use drones to help protect stadiums

At the FIFA World Cup 2022 this winter added hi-tech security measures will be added with the use of Drones to protect stadiums.

Developed by Fortem Technologies, the drone is autonomous and fires nets to snare a target drone.  Named ‘DroneHunters’ it is radar-guided and offers an alternative way to bring down rogue drones safely.  Especially in built-up areas that may pose a threat if weapons are used, thus reducing the risk of injury.

Based in Utah, Fortem CEO and co-founder, Timothy Bean said that they will be working for the Qatari Ministry of Interior and Safety and Security Operations Committee during the FIFA World Cup in Qatar utilizing their drones for maximimm security.

They have also deployed anti-drone systems at the World Economic Forum meeting at Davos and other sporting events successfully.

In addition to this

They claim that at various security sites around the world the drones have had “live kills”.

Remembering an attempted terrorist attack in 2015 at the Stade de France where a football friendly between France and Germany, Prof David Dunn from the University of Birmingham believes that with the use of a drone it would have been able to enter the stadium opposed to ground-based terrorists.

the unsuccessful attempt by suicide bombers

Heightened concerns of commercial drones that have been modified into weapons such as in Ukraine and Yemen has increased the threat from terrorists.

A professor from the University of West of England, Dr, Steve Wright believes that Fortem’s system can be effective against smaller drones.

Security with the benefit of drones will keep fans safe and secure at the upcoming FIFA World Cup 2022 in Qatar, which is nice to know!